Technical issues are part and parcel of any show, but it’s not often you see it evolve into a completely impromptu performance between artiste and fan that kept the whole crowd going.

That was exactly what happened during South Korean pop-rock girl group DREAMCATCHER’s latest gig on our sunny island on 22 March, when the music cut off midway through their latest single ‘Piri’ due to a technical fault. Undeterred, the seven talented ladies – JiU, SuA, Siyeon, Handong, Yoohyeon, Dami and Gahyeon – continued the song without backing music, while their fans (known as InSomnias) responded by enthusiastically completing the lyrics for them.

A lil’ oopsie moment happened when ‘PIRI’ got cut off halfway, but @hf_dreamcatcher (and Insomnias) continued singing without the music! QUEENS ONLY ❤️#DREAMCATCHERinSG #DREAMCATCHERinASIA pic.twitter.com/1sp9sS9usO

This was just one of the many standout moments that occurred that night. The septet had been in town for the Singapore leg of their Asian tour Invitation From Nightmare City, which marked their first solo performance here after a previous appearance at HallyuPopFest 2018. 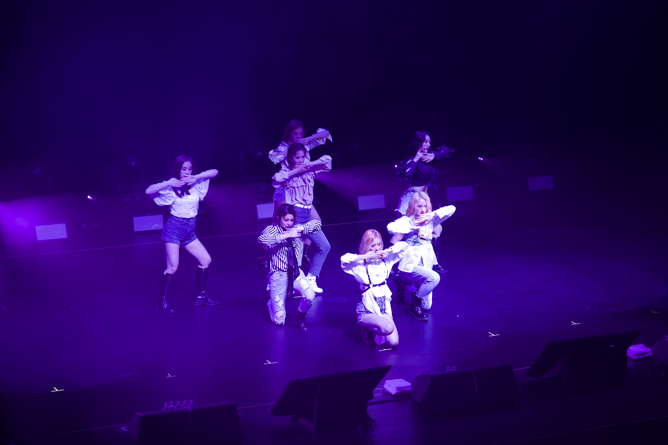 With catchy dance hits, sultry vocals and energetic pop-rock bangers among their discography, it was unsurprising to see a packed Gateway Theatre of Singapore InSomnias – most dressed in red to match a fan support event ­– waiting with bated breath for the girls to bring the house down.

Here are some of our favourite snippets that show you exactly why DREAMCATCHER deserves their ardent following.

#1 They carried the show with ease

Some groups might need cues from their leaders or video segments interspaced between songs to prepare for their next track, but not DREAMCATCHER. In a fairly no-frills two hours chockfull of infectious earworms like ‘Good Night’, ‘Chase Me’ and ‘Over The Sky’, the group led fans through each segment energetically, barely having the time to drink up or leave the stage to catch a breather. Fans were seldom kept waiting, with the girls even introducing a special album giveaway and game segment to spice things up.

dreamcatcher played the concentration (?) game to choose the loser to introduce the next songs with aegyo.

both handong and jiu lost immediately and they decided both of them shall do the penalty together #DREAMCATCHERinSG #DCinSG pic.twitter.com/EEV6RgoonQ

#2 They’ve got some impressive English skills

Although we’re sure the biggest of fans would try to learn Korean so as to understand their idols better, the girls also took it upon themselves to speak in English sans a translator whenever possible. Leader JiU sent a huge heart in InSomnias way with a declaration of “I love you” during ‘Lullaby’ (cue screams from across the theatre), while Yoohyeon spoke entirely in English during their final talk set despite feeling nervous about their performance.

Bonus: Chinese member Handong also spoke in Mandarin, saying “I love you” to everyone. Aww!

We want @hf_dreamcatcher to sing a ‘Lullaby’ to us every night~ 🌖 (feat. JiU saying “I love you” to Insomnias! 💜)#DREAMCATCHERinSG #DREAMCATCHERinASIA pic.twitter.com/1mX089r3Vu

#3 These goth princesses can be cute too!

While DREAMCATCHER is known for their horror-esque concept, they’re just seven girls who want to have fun behind their goth princess personas. During the introduction for their recent hit ‘Piri’, the girls stepped away from their serious selves to break into impromptu dance routines, while waving at fans and prancing around the stage – definitely not what some might expect from them!

Breaking into groups of threes and twos, the girls covered some of their favourite English tracks in sub-units. SuA and Yoohyeon covered Charlie Puth’s ‘Attention’ in a beautiful duet, Dami and JiU hyped the crowd up with ‘I Don’t Like It, I Love It” by Flo Rida, while we were asked out by Gahyeon, Siyeon and Handong’s rendition of Justin Bieber’s ‘Boyfriend’. Each part highlighted the members’ powerful vocals, and Handong, in particular, showcased her hidden rap skills. Talk about talent!

Sua and Yoohyeon sure got our attention with their flawless cover of Charlie Puth’s ‘Attention’! 😍#DREAMCATCHERinSG #DREAMCATCHERinASIA pic.twitter.com/tW7eMtRlND

#5 They’re full of love for their fans

At the heart of it, the concert was made incredibly memorable by the sheer amount of genuine affection the girls showered on the fans (and vice versa). Sending hearts, engaging with fellow InSomnias and noticing each and every fan support project throughout the night, our queens of fan interaction were a complete joy to watch.

And fans, in turn, shared their love back. An impromptu birthday song for Handong near the end of the concert caused her to burst into tears, and the other six girls immediately came forward to give her a big bear hug in a heartwarming scene.

and of course our girls all went to her to comfort her ㅠㅠ one of the most beautiful ot7 moments tonight #DREAMCATCHERinSG #DCinSG pic.twitter.com/JKMKwzJoQX

Fan-favourite track ‘Full Moon’ (as well as an encore of three more hits) ended off the night. We think it’s safe to say that InSomnias aptly couldn’t get a wink of sleep after the show – and fittingly so.

Psst, Teenage also caught up with DREAMCATCHER before their concert for an interview! Check out the full video below. Special thanks to MyMusicTaste for the interview opportunity!

More related stories: 5 Moments That Made Us Fall In Love With Lovelyz At Their Singapore Concert, Interview: MOMOLAND Opens Up About Their One-Hit Wonder Status, Teamwork And Future Goals