When we first got to know about JJ Project, we thought no other GOT7 sub-unit would be able to top the unbeatable pairing of JB and Jinyoung – until the arrival of JUS2.

Made up of leader JB and maknae Yugyeom, the charismatic sub-unit made their debut back in March and has since been hitting up various cities for their showcase tour, before finally making their way to Singapore on 4 May to wrap up the final stop of their tour. But they didn’t come empty-handed; fellow member Mark also made a special appearance as the host for the showcase, much to fans’ delight.

And the surprises didn’t stop there – besides doling out tons of TMI moments and fanservice antics (in typical GOT7 fashion, no less), JUS2 also thrilled Ahgases with multiple encore performances and a special video shoutout from some VIP guests. Read on to recap some of the highlights of the night!

#1 JB and Yugyeom showed off their sensual charms 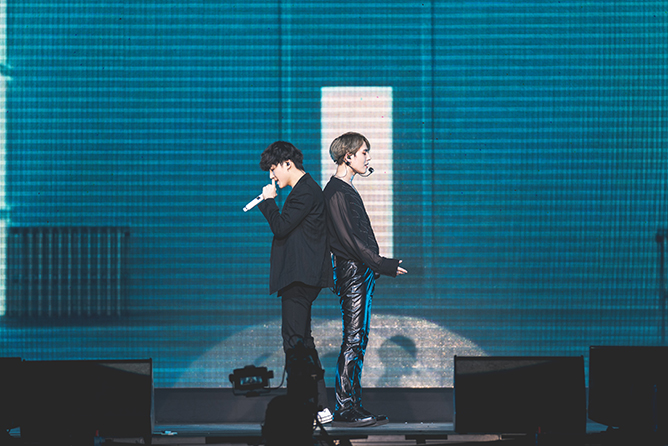 While GOT7 is known for their high-adrenaline bangers and hard-hitting choreography, the duo went for a more mature concept that showcased their sultry vocals and sleek moves in tracks like ‘Long Black’ and ‘Drunk On You’ off their debut EP FOCUS. In order to “look sharp” for this album, Yugyeom revealed that both of them had to go through a tough diet to maintain their chiselled features. We must say, their efforts certainly paid off!

Ahgases were in for surprise when Mark appeared on stage and introduced himself as the emcee for the rest of the night. We know how chaotic the JUS2 members can be, but add Mark into the mix and it’s a recipe for disaster. Shortly after opening the show, Yugyeom commented that it’s hot, which led to Mark jokingly asking him to take his jacket off. The latter then added that he watched their performance backstage and he felt that it was really “sexy”, to which the cheeky maknae didn’t hesitate to reply, “I know, because I’m sexy.” Oh boys, stop being such a tease!

#3 We learned some rather TMI facts about the boys 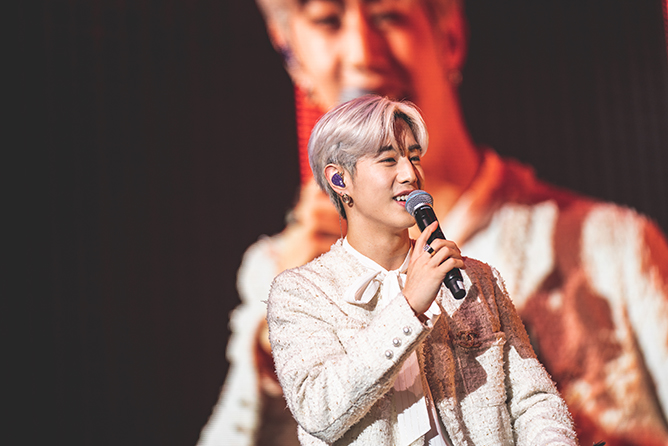 In the next segment, JB and Yugyeom were tasked to answer a series of personal questions about each other – and when we say personal, we mean… personal. Some lesser-known trivia we never knew we needed: did you know that Yugyeom would wet his toothbrush only after squeezing out the toothpaste? Or the fact that JB puts one feet under the blanket and takes the other feet out when he’s sleeping? Well, now you know.

And just in case you’re curious about the results, the game ended in a tie.

#4 Two lucky fans had a staring contest with JUS2

Although there wasn’t any onstage interactions with fans during the fanmeet, two Ahgases were lucky enough to be randomly selected from the crowd to engage in an eye contact battle with the JUS2 members so they could win themselves autographed albums. While the audience squealed in envy over the swoon-worthy moment, it was hilarious how the boys – Yugyeom, in particular – ended up turning bright red in embarrassment halfway through the game and lost to the fans. What a reversal!

#5 The boys treated fans to a GOT7 medley 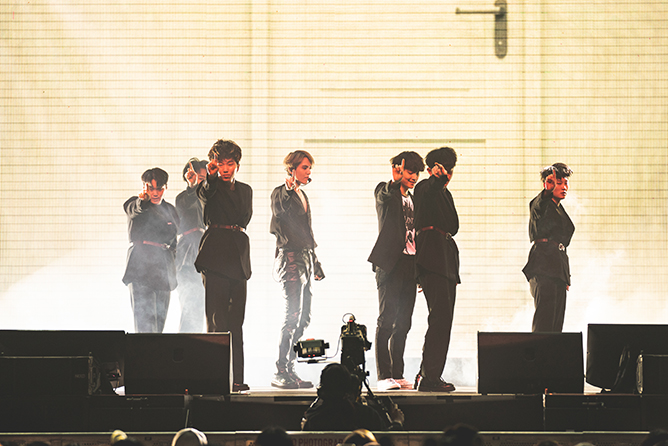 Wrapping up the show with a bang, JB and Yugyeom were joined by Mark to deliver a high-octane encore medley of GOT7’s hit tracks including ‘Hard Carry’, ‘Never Ever’ and ‘Go Higher’, which got everyone up on their feet and dancing along to the beat. Just when we thought the showcase was over, the boys surprised us with yet another round of ‘Focus On Me’ (which they dubbed as ‘fancam time’) as fans scrambled back to their seats to immerse themselves in the performance.

BONUS: A surprise message from GOT7!

After saying their final farewells, a special video from JUS2 popped up on the screens to thank fans for supporting their unit activities. But what we didn’t expect was the surprise appearance of the rest of the GOT7 members, who all showed up towards the end of the video to announce their long-awaited group comeback. Welcome back, GOT7!

Meanwhile, GOT7 is set to embark on their upcoming world tour starting from June. Even though Singapore is currently not among the destinations included, more cities are expected to be added onto the list so let’s keep our fingers crossed!

More related stories: 7 Times GOT7 Made Us LOL During Their Singapore Concert, Your Ultimate Guide To All The Major Concerts Happening In 2019