“We felt like we could not finish this concert with any regrets,” said a sweat-drenched Johnny, one-tenth of the K-pop mega boy band NCT 127. True to his words, the 10-member hit machine (sans Winwin) left no room for regrets as they powered through a high-octane setlist of crowd favourites like ‘Cherry Bomb’, ‘Limitless’ and ‘Fire Truck’ at their first solo concert in Singapore.

Despite it being the final leg of their NEOCITY: The Origin world tour – which saw them performing a total of 37 shows since January this year – the boys showed no signs of exhaustion as they gave their all throughout the two-hour set. 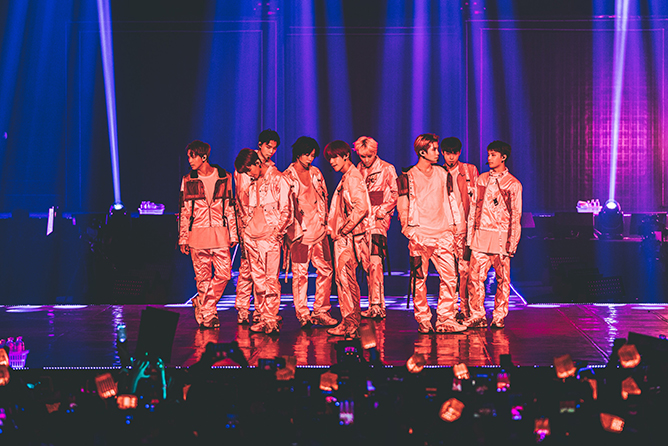 Going into a NCT 127 concert, we were prepared to be blown away by their explosive performances – after all, the group has always been known for their killer choreography. But more than that, what we got was a show-stopping display of solid vocals, acrobatic stunts and water bottle shenanigans that made us go full-on NCTzen mode. Oh, we’ve got some sexy abs action from a certain turquoise-haired rapper too.

And because we have too much feels to unload, here are some of the unfiltered thoughts that went through our heads in a theatre full of lightstick-wielding NCTzens.

We all know that Taeyong can be an abs-olute (sorry, we just had to!) tease at times, but never did we expect to witness his chiselled abs in its full glory. The NCT 127 leader sent fans into a frenzy by lifting up his shirt midway through his verse during ‘Mad City’ – and this fan’s tweet below perfectly summed up our emotions.

As much as we love their powerful dance moves, there’s just something about their vocals that drew us in right from the get-go. After a couple of high-adrenaline bangers, the boys then went on to serenade the crowd with a romantic rendition of ‘Jet Lag’ – a soulful ballad off their latest EP in order to show fans a “warmer side” of themselves. We might or might not have shed a tear at this point…

personally my FAVORITE line in jet lag (and maybe the whole album…), and it sounds even better live 😭 #NCT #태일 #NEOCITYinSG pic.twitter.com/HCUJrYlSUt

If NCT 127’s performance of ‘Wake Up’ was their way of telling the world not to sleep on talent, it worked. Bringing a gigantic jungle gym onto the stage, the members impressed the audience with their smooth acrobatic moves as they climbed atop the metal structure. How dope was that?

Major kudos to whoever that came up with the idea of flinging frisbees to the audience! We’ve seen idols throw everything from flowers to candy and balls, but autographed frisbees? That’s smart; even fans at the furthest rows in the stadium were able to get their hands on one. Also, Jaehyun might want to consider adding frisbee to his list of skills – just look at him go!

#5 “The hyung line’s sexy pose battle was everything.”

While the other members were changing their outfits, the older ones were tasked to entertain the crowd… and boy, did they entertain. Chaos ensued when the hyung line decided to take turns to see who could strike the sexiest pose. Yuta and Taeil did a pretty decent job – lip bites, hip thrusts and all – but trust Taeyong to turn it into a not-so-PG water show by, uh, pouring a bottle of water all over his head.

Johnny, being his extra self as usual, was so shocked that he acted like he fainted. But when it was his turn, the cheeky chap did an encore by emptying the remaining water from Taeyong’s bottle over his own head and running his fingers through his hair. Phew, things were getting hot in there!

Right after Johnny and Taeyong’s water antics, the members snapped back to reality and proceeded to diligently wipe the stage dry. It has been a good week since this happened, and we still couldn’t stop cracking up at this hilarious scene!

One by one, the boys took turns to thank NCTzens for their support, looking visibly touched as it was the last stop of their tour. Although the tour was a massively successful one, it had been particularly gruelling on Haechan, who had unfortunately sustained a leg injury at the start of the tour.

“I felt very apologetic because I thought I was being a burden, but they were so supportive throughout the tour,” said the teary-eyed maknae, before exchanging hugs with the rest of the members. “We went through so much together, and all I want to say is how thankful I am to be able to make great memories with my brothers.”

Wrapping up the show on an emotional note, NCT 127 ended the night with ‘0 Mile’ – a reminder to fans that no matter how far they are, the distance between them is always 0 mile.

NCTzens, tell us what you love most about NCT 127’s concert in the comments below!

More related stories: Everything You Need To Know About NCT, Here’s Exactly What Went Down At HallyuPopFest 2018