Not one to settle for a regular desk job? From a jagua tattoo artist to a professional cosplayer, take inspiration from these five individuals who are carving their own career paths by taking the road less travelled. 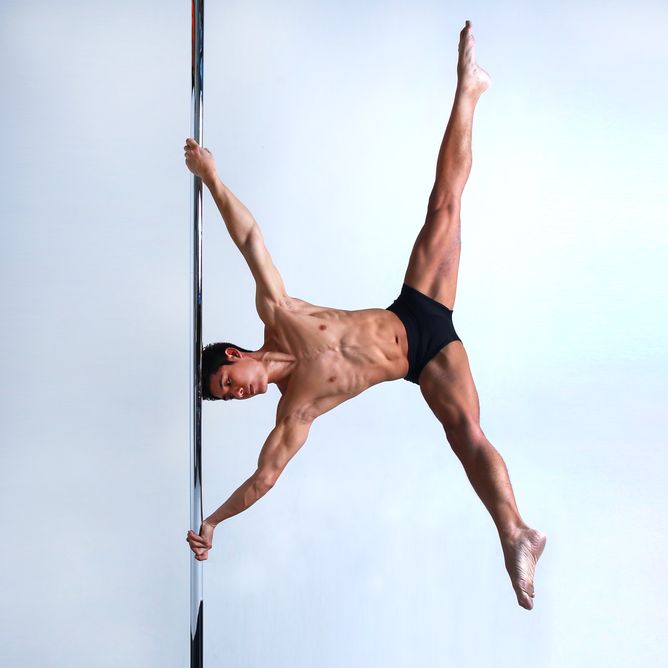 Gravity-defying stunts, jaw-dropping tricks and hours of strength training are all in a day’s work for Louis Sue, who’s one of the few professional male pole dancers in Singapore. Often regarded as a feminine dance form, the dance instructor of PXD Pole Studio defies traditional norms by inspiring more men to take up the sport. To share his passion with the masses, the budding champ even took part in Asia’s Got Talent where he impressed the judges with his undeniable talent.

On picking up the unconventional sport:

“I was looking to do something that incorporated both fitness and dance. Watching professional pole dancers defy gravity with seemingly impossible tricks really drew me in. I told myself to give it a try and signed up for a trial class. In my first lesson, I could already see how supportive the community is and how elegant yet strong pole dancers are. Just like that, I fell in love with the sport.”

“Although pole dancing is still considered a female-dominated dance form, more and more guys are starting to enter the scene and creating a style of their own. In fact, we see about two to three males in each of our classes now, compared to almost none previously.”

On the local pole dance scene:

“I feel that pole dancing has become more widely accepted as a sport in Singapore. Even through there’s definitely a fair share of people who are still unaware of what pole dancing is about, I hope that we can continue to share our passion with the masses.”

On tips for beginners:

“The main struggle isn’t the lack of strength or flexibility, but rather the fear of trying. Much like any other sport, all you have to do is take the first step; everything else can be built progressively over the course of this sport. Just give it a go, you won’t regret it!” 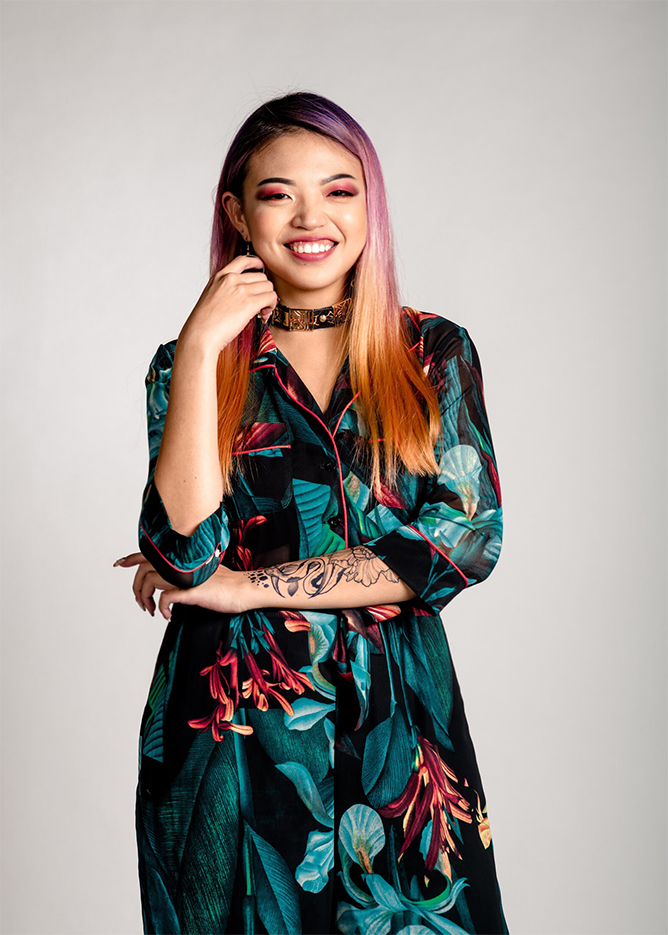 See Min is not your average tattoo artist. The founder behind Henndrawn, the NUS sociology graduate prides herself as the first ever jagua tattoo artist in Singapore. For the uninitiated, she specialises in using organic fruit-based ink to create stunningly realistic body art. The catch: it lasts for just two weeks, but you get the freedom to try out something new each time. With her eye for detail and penchant for experimenting with diverse styles, her bold yet tasteful designs are sure to make a unique statement.

On using art as a coping mechanism:

“When I was 18, I was really stressed out from A’Levels so I resorted to art as a creative outlet. I’ve been drawing all my life, and got introduced to the idea of tattoos by my favourite celebrities like Jolin Tsai. However, my mother didn’t allow me to get a real tattoo thus I decided to innovate and began doing temporary tattoos.”

On changing the perception towards tattoos:

“While focusing on my own problem of not being able to have tattoos, I accidentally solved the problems of others. It then dawned on me that a natural curiosity and demand for jagua tattoos was created due to the social stigma of tattoos in Singapore. I want people to realise that having tattoos doesn’t change who you are as a person. In fact, it might even help to bring out one’s unique identity.”

On the most fulfilling experience she’s had:

“It’s easy to forget that every client comes to us with a purpose for the tattoo. So I created a movement called #OurMessageToYou where we encourage people to share their stories with us in exchange for a tattoo. Through the intimate exchanges, we realised the healing power of jagua tattoos and what we can bring to our clients.”

On advice for aspiring body artists:

“Listen to your heart. If you want something, nothing can ever stop you. When you start to fear, it’s a sign to actually do it because it means you’re ready to step out of your comfort zone.” 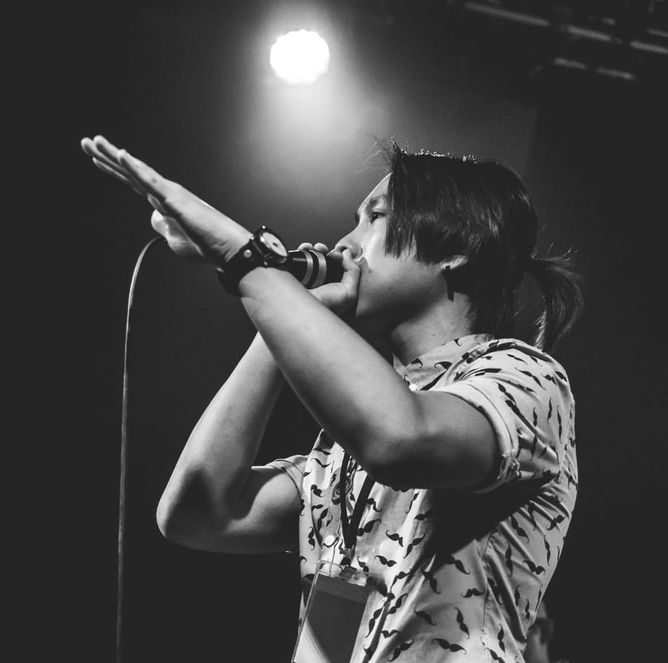 A mathematics and economics student by day and busker by night, Yee Kien is part of an emerging group of individuals who aren’t afraid to make the city their stage. When he’s not performing to the tunes of Ed Sheeran and JJ Lin on the streets, the talented music- maker can be found showcasing his beatboxing skills in local and regional competitions, even bagging a couple of awards from it. So, the next time you pass by a busker, stop for a moment… and listen.

On his personal musical style:

“My personal style in music is pretty niche; even though it covers a wide range of genres, my style of delivery is all through my vocal chords. Beats, you got it. Guitar, coming right up. Er-hu? Violins? Electric guitar? All me! I use this arsenal of sounds I’ve picked up over the years, input it into my looper and fit it into the songs I sing. I’m essentially a one-man acapella band!”

On his most memorable audience interaction:

“Once, I was busking near the residential area and someone complained so two police officers came to investigate. I thought my busking license was going to be revoked, but to my surprise, the police officer gave me a pat on the back and said, ‘Bro, you were awesome! Keep doing what you do.’ Those words of encouragement meant a lot to me and it inspired me to keep going.”

On an important life lesson:

“I’ve learned that passion is what makes the world go round. Buskers may be on the streets for different reasons, but they are all there with one common purpose: to spread their passion to the world. When you actually stop and listen to one, you can most definitely feel their passion, and that drive is what makes people do what they do.”

On plucking up courage:

“It sounds cliche, but I would say: just do it. It gets easier after you sing the first song, so take the courage to make the first step. If you’re hungry and you wanted food from the coffeeshop across the road, but you chose not to because you fear getting run over by a car, you’ll never get your food. Remember, there will always be people stopping to watch you perform and that’s all that matters.” 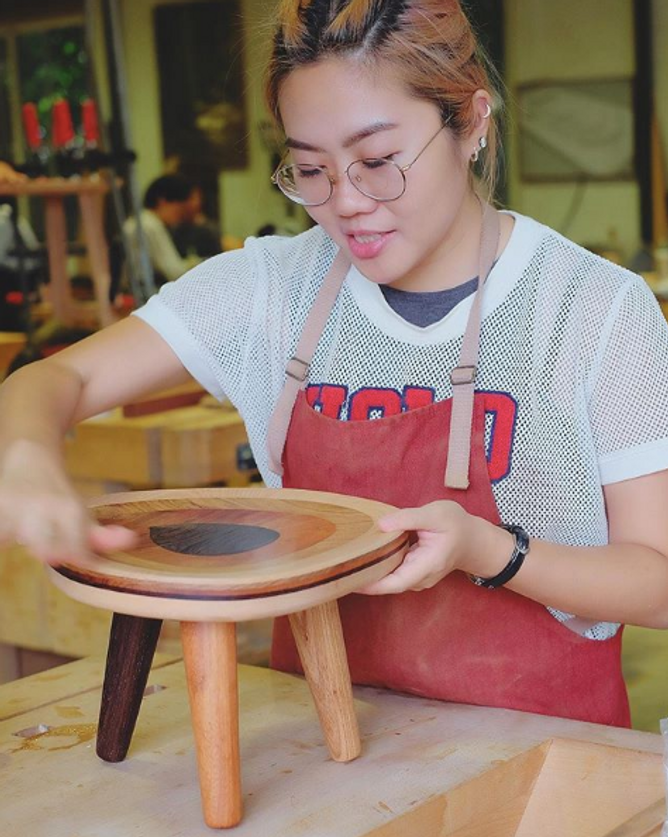 When you think of a carpenter, you’d picture big, often older men with calloused hands. For someone who wields heavy machinery on the daily, modern-day wood designer Lyn Ng is far from your typical carpenter, but that doesn’t mean she isn’t down to tough it out. After calling it quits at her high-paying marketing job, she packed her bags for a six-month stint in Taiwan where she learned the art of wood design. As one of the few female wood designers in Singapore, Lyn aspires to showcase her love for the craft through her personal brand, Studio MU YU.

On making her career switch:

“I was in this burnout phase as I was stuck in a cycle of working from 9am to 1am almost every day for three weeks. I never felt accomplished, so I decided to seek advice from my mentor and she told me, ‘If you’re passionate about what you’re doing, you’ll eventually find the time and effort to make it happen.’ And that was what encouraged me to quit my desk job to pursue something I’m passionate about: woodworking.”

“Carpentry is not just meant for the experienced veterans, but for everyone. There are plenty of woodworking workshops in the market right now and I think it’s a good start for anybody who’s bold enough to take on a skill that is out of the norm.”

On setting up her own business:

“I first took up an apprenticeship at a local studio, where I realised that many small pieces of wood are discarded along the production line. Building on the values of minimising waste and creating products that don’t undercut workers, this inspired me to conceptualise my first series of sustainable accessories for modern women known as Studio MU YU.”

“I have male relatives who told me that I couldn’t make it far in this field, which made me second guess myself thinking if I am really cut out to learn this ‘masculine’ skill. But I’m lucky to have met so many like-minded carpenters who taught and guided me along the way. Having started my own brand, I feel even more empowered to embrace challenges and turn it into a story of my own.” 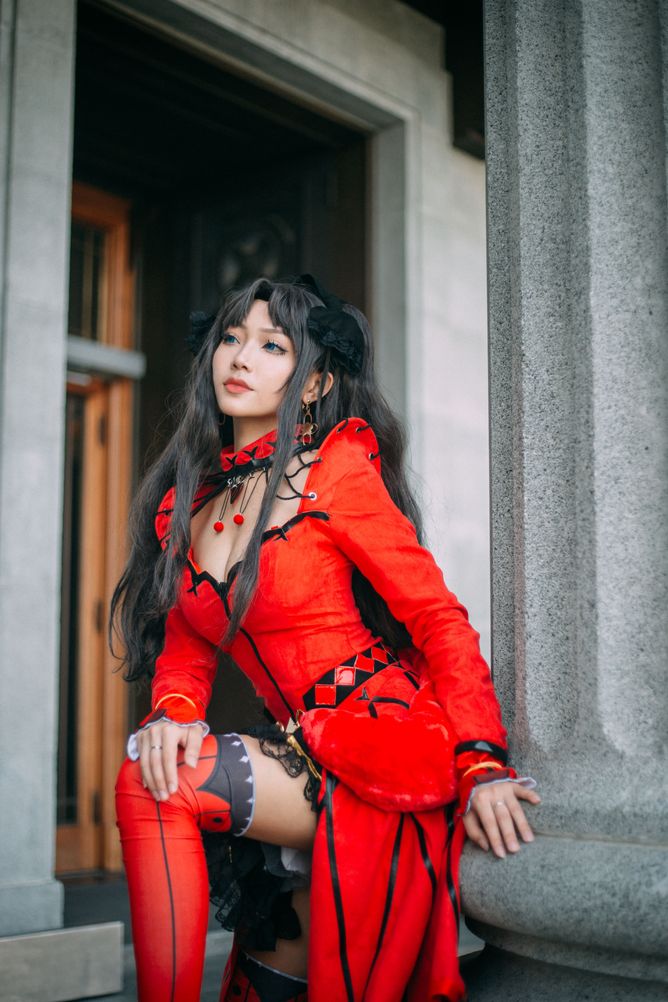 Cosplayers are aplenty, but few are able to successfully turn their geeky past time into a steady cash flow – just take it from Rea Kami. What started as a sheer love for anime has flourished into a burgeoning career for this young cosplayer, who makes a living from designing and styling herself as characters from Overwatch, Evangelion, Fate etc. for major cosplay conventions all over the world. Check out @reakami on Instagram for more of her works!

On getting into cosplay:

“I was a big fan of anime when I was around 7 to 9 years old; edgier series like Hell Girl, Death Note and Bleach were all the rage during that period. But it wasn’t until my secondary school days that I started developing an interest in this hobby, after being introduced to the world of cosplay by a junior.”

“Not all female cosplayers do NSFW (not safe for work) content. Many people jump onto the risque elements of cosplay the moment I say I’m a cosplayer. On the contrary, I take pride that my work is mostly SFW.”

On building her fanbase:

“It’s all about staying organic and interacting with your followers regularly! The aim is to build a safe community where fans can rave and discuss about their interests, be it anime or game appreciation.”

On a typical day off:

“I binge-watch Netflix and catch up on anime series to get inspiration for my content. I also attend weekly Dungeons & Dragons gaming sessions with my friends!”

“Prior to cosplay, I was actually more interested in voice work and it was my first career choice. Cosplay just became an avenue successful enough for me to fully venture out into! In the future, I would also love to try making videos on beauty content using my cosplay knowledge.”

This article was adapted from Teenage Portfolio 2019. For more inspirational stories, be sure to pick up a copy of our latest issue, out on newsstands now!