Missed out on Eric Chou at his last concert? For those who didn’t manage to get a ticket for his 22PLUS 2018 Asia Tour previously, you’ll be thrilled to know that the Mandopop heartthrob will be making his way to our sunny shores again as part of his brand new tour!

Who doesn’t love Eric Chou? With a string of chart-topping hits including ‘Let’s Not Be Friends Anymore’, ‘How Have You Been’ and ‘The Chaos After You’, the Taiwanese singer-songwriter has since garnered a dedicated following of fans both old and young thanks to his swoon-worthy ballads, boyish good looks and undeniable charms.

And there’s no doubting his popularity here either – the singer played to a sold-out crowd of 5,000 last year at the Max Pavilion, and even then, the venue was hardly enough to accommodate all his supporters. But fans of Eric have little to worry about at his upcoming concert, as it will be held at the 12,000-capacity Singapore Indoor Stadium this December.

Following three successful shows in Taipei and Kaohsiung Arena, the 24-year-old will finally be bringing his How Have You Been 2019 Asia Tour to Singapore, complete with international production from Mandopop legend A-Mei’s concert entourage as well as his very own string orchestra. Not only can fans expect high-quality performances from Eric, there will also be top musicians making an appearance during the tour.

Bonus: if you purchased your tickets before 3 November, you may be one of the 300 lucky fans to score an opportunity to meet him up-close and get your tickets autographed by the man himself.

Don’t miss your chance to catch Eric Chou at this one-night-only performance! 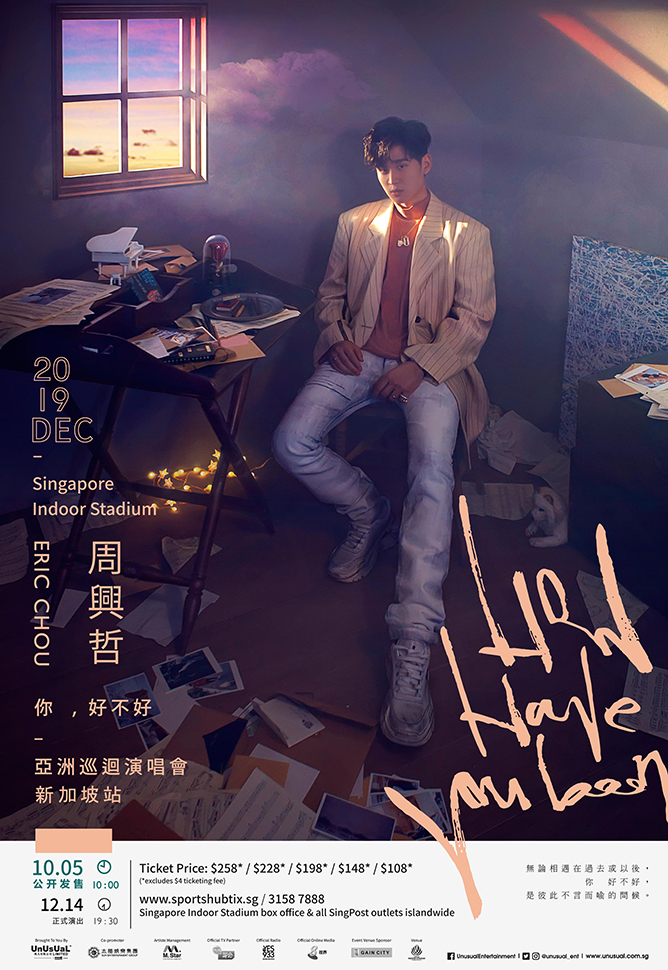 Tickets will go on sale from 5 October, 10am via www.sportshub.com.sg or by calling 3158 7888. Tickets are also available for purchase at the Singapore Indoor Stadium Box Office, all SingPost outlets, The Star Performing Arts Centre Box Office and Scotts Square Concierge Desk.