Despite being three members down, the septet (sans Xiumin, D.O. and Lay) showed no signs of slowing down as they effortlessly powered up the stage with their dynamic performances of hits like ‘Call Me Baby’, ‘Tempo’ and ‘Love Shot’.

Here are five moments of the evening when EXO got us absolutely hooked! 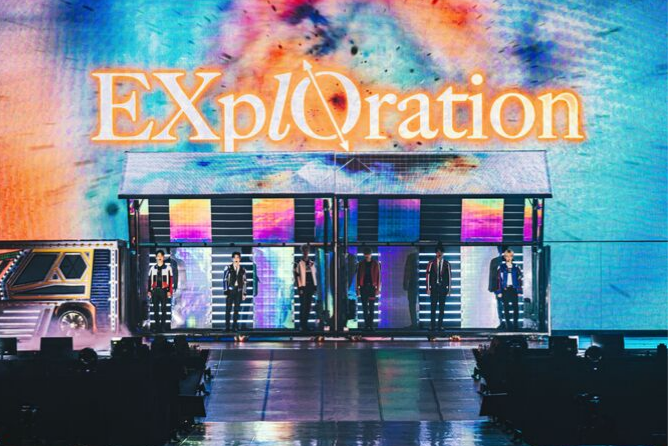 #1 THE SOLO AND UNIT STAGES

As if the atmosphere was not heated up already, Baekhyun literally got EXO-Ls melting with his sensual solo stage of ‘UN Village’. From his chic white suit to the hynoptising gazes and flirtatious smiles, this charmer sure knows what to do to get fans going wild. He’s not called a stan-attractor for nothing!

There wasn’t any downtime for EXO-Ls at all as Chen followed up to serenade the crowd with his honey vocals in ‘Lights Out’. Power duo EXO-SC (comprising of Chanyeol and Sehun) is also not a force to be reckoned with – their high-octane performances of ‘What A Life’ and ‘Closer To You’ had fans up on their feet and dancing along to the beat in no time. And of course we have Kai, the ultimate dancing machine, with his electrifying dance number ‘Confession’.

Hold up, did we miss out on someone? Abs-olutely not.

We certainly didn’t expect to witness a walking sculpture of Suho’s toned upper bod – on top of his already impressive vocal and dance skills – in its full glory during his solo cover of EXO’s ‘Been Through’. The sweetheart of a leader even got us going “aww” at his attention to details as he proceeded to change his outfit into a red suit that matched best with Singapore’s identity.

It’s also worth noting that Suho even freed up time to visit Gardens By The Bay during their short 2D1N stay in Singapore. He even complimented our breathtaking night view, smoothly adding that it’s “beautiful like you (EXO-Ls)”. Just how perfect can the man get?

EXO showed fans that they’re still the same cheeky boys at heart with their ceaseless bantering with one another – such as when the members egged Chen on to reveal more skin during his solo stages next time, going on about his “sexy thighs” and even breaking out into a mini workout session of squats and lunges on stage. We lost it when Chanyeol joked that Chen will be lunging his way back to Korea!

They were in the middle of their ment & suddenly started doing thigh exercises!!

It was hard to miss the sea of white, which was set to be EXO-Ls’ unique dress code for the Singapore concert. To the boys’ amazement, the white dress code was alluding to the white feline named ‘L’ in EXO’s ‘Power Up’ music video. ‘L’ also happens to be an affectionate pet name that EXO has given to their fans (L-ie/Aeri). What a meaningful fan project by SG EXO-Ls!

The group took us on an emotional ride down the memory lane with a medley of their hit songs ‘Growl’, ‘Overdose’, and ‘Call Me Baby’. EXO and EXO-Ls have had a good share of ups and downs for the past eight years, and these representative classics definitely got the boys (and us) feeling nostalgic.

The transition from Growl to Overdose was SOOOOO HOT 😍♥️ #EXplOrationinSG pic.twitter.com/2pibng7Fg7

As the concert comes to an end, they expressed their regrets of doing only one show in Singapore and promised to come back again for a two – no, even a three-day show the next time round, hopefully in full force with all members present. In the meantime, fans can also look forward to an album and comeback in the making, as promised by the boys themselves. Talk about ending the concert on a high!

EXO-Ls, what was your favourite moment of the evening? Tell us in the comments below!