There are plenty of reasons to rave about this year’s installment of HallyuPopFest 2019 – just its sheer roster of acts alone is enough to make you ditch all your plans to attend this blockbuster fest. From power players like Super Junior and Winner, to up-and-comers like (G)I-DLE, KARD and N.Flying, we were treated to two days of wholesome K-pop goodness on 25 and 26 May 2019 at the Singapore Indoor Stadium. Missed out on the action? Fret not – here’s the lowdown of what went on during the adrenaline-fuelled weekend. 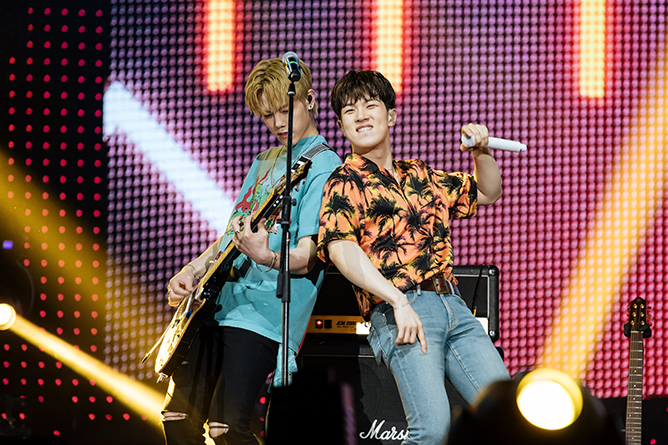 First up to hit the stage was N.Flying, who kicked off the evening concert with energetic rock anthems such as ‘How R U Today’, ‘Say Goodbye’ and their sleeper hit ‘Rooftop’, before winding it down with a special rendition of ‘Spring Memories’. Despite this being their first time performing in Singapore, the four-piece showed no signs of nervousness as they drew in the crowd with their infectious energy. 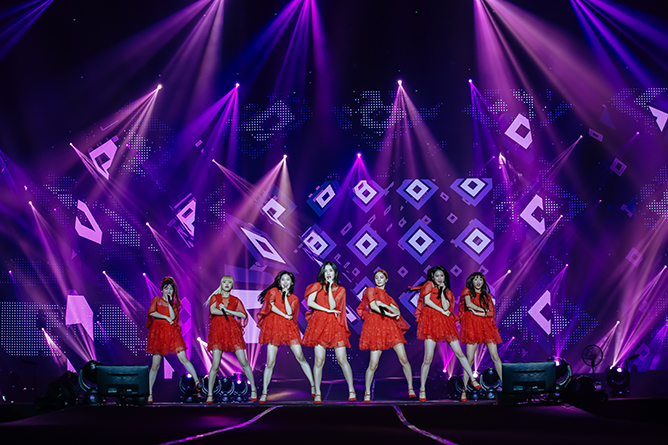 Known for their delicate tunes and girl-next-door charms, the girls of Oh My Girl dazzled with their melodious performances of ‘The Fifth Season’, ‘Liar Liar’ and ‘Secret Garden’. But what really stood out to us was that almost all of the members were using handheld mics, wowing the audience with their live vocal chops while flawlessly busting out the dance moves. No lip-syncing at all! 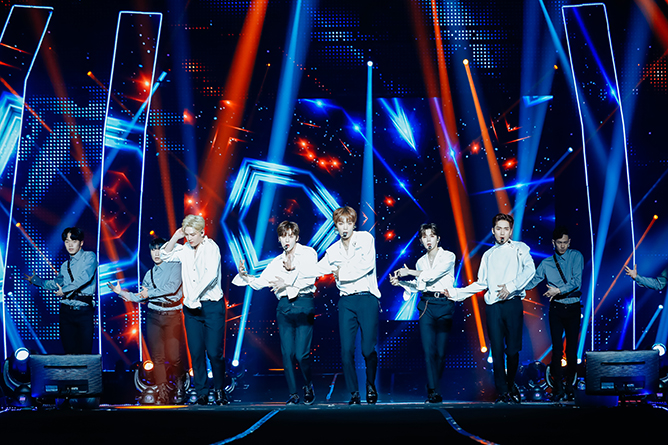 The loudest screams of the night were evidently reserved for NU’EST, who took over the stage with the throwback hit ‘Hello’ – officially marking their long-awaited return to Singapore as a quintet. With Minhyun back in the team after his temporary stint in Wanna One, the five-member group showed off their never-changing chemistry as they revived some of their older jams such as ‘Love Paint’ and ‘Look’. We can’t wait for their full concert in August! 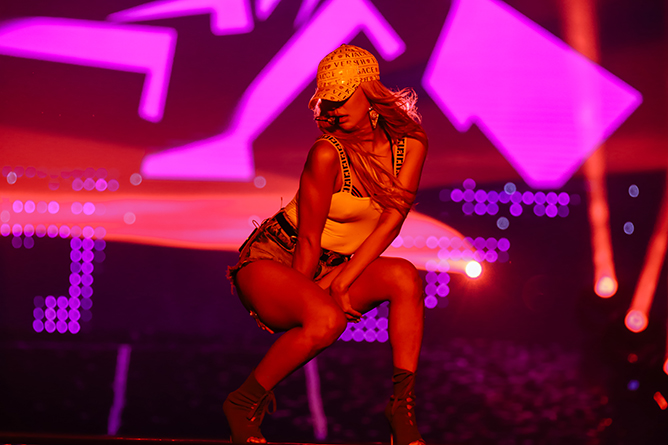 Formerly a member of popular girl group SISTAR, Hyolyn proved that she was more than capable of holding her own as a one-woman band. After bringing the house down with a couple of her solo tracks, the powerhouse vocalist also delighted longtime SISTAR fans with a medley of familiar tunes including ‘Ma Boy’ and ‘Shake It’. 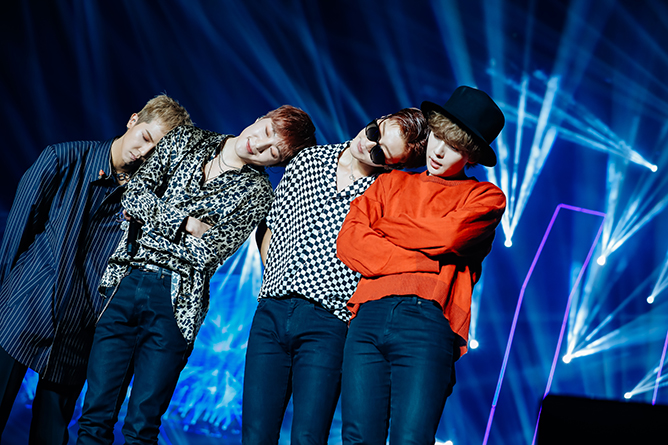 If there’s one thing that could be said about Winner, it’s that they certainly knew a thing or two about putting on a show – the party was just getting started at this point! Although there were some slight technical mishaps here and there, it didn’t stop the quartet from slaying their set which consisted of all their biggest hits like ‘Everyday’, ‘Really Really’ and ‘Ah Yeah’. 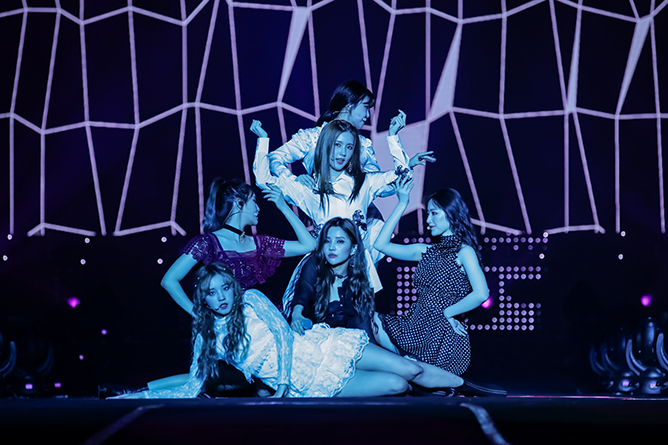 One of the hottest rising rookies in the K-pop game right now, (G)I-DLE has since skyrocketed to popularity with their girl crush concept and charismatic stage presence. Their debut performance here was nothing short of spectacular, as the girls went on to charm fans with their definitive tracks ‘Latata’, ‘Hann’ and ‘Senorita’. 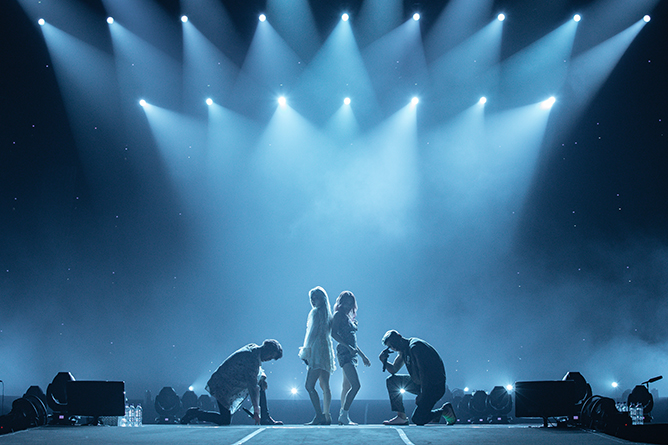 Leave it to KARD to bring the atmosphere to a new high as they bursted onto the stage with their signature dancefloor bangers ‘Oh NaNa’, ‘Don’t Recall’ and ‘Hola Hola’. Ending their set on an explosive note, the foursome wasted no time in getting the crowd up on their feet with a rousing performance of their latest earworm ‘Bomb Bomb’. 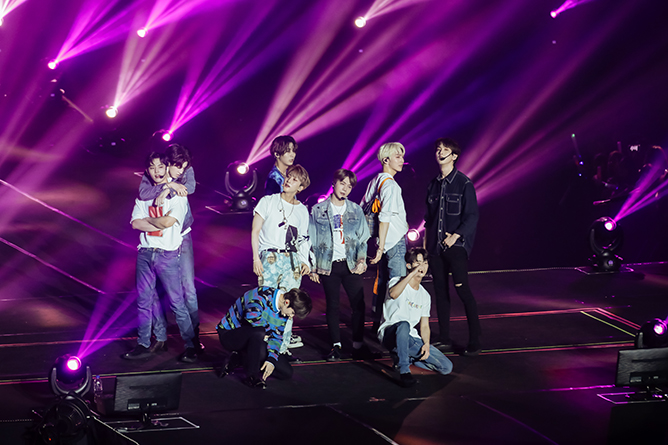 There was just something about watching all nine members of Pentagon dance in perfect synchronisation that made their performance all the more impressive. As they went on to deliver crowd-pleasers ‘Critical Beauty’, ‘Naughty Boy’ and ‘Shine’, it became clear that these guys knew how to have fun on stage – and it’s safe to say we enjoyed it just as much. 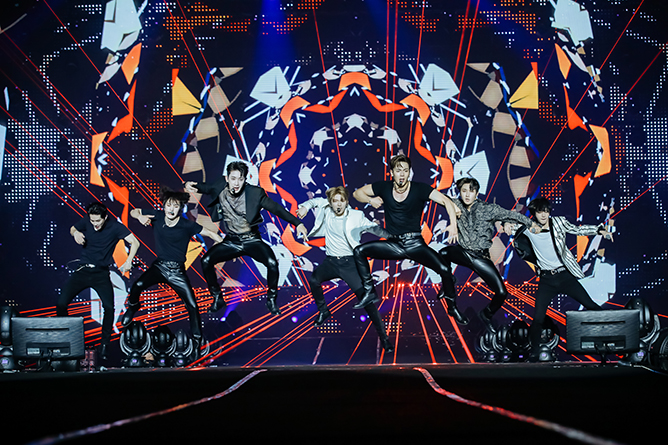 Following Pentagon, the hot-blooded lads of Monsta X made a powerful entrance to rapturous cheers from Monbebes as they performed their monster hits ‘Jealousy’, ‘DRAMARAMA’ and ‘Alligator’. But the highlight of the night was when Wonho took off his jacket midway through their set, revealing a mesh tank top underneath that sent fans into a tizzy. 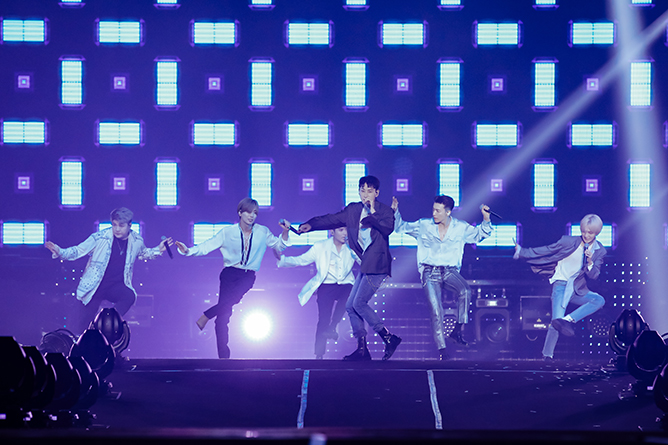 Make way for the legends! ELFs were out in full force for Super Junior, transforming the stadium into a gorgeous sea of blue that welcomed the group. The K-pop hit machine closed out strong with album classics ‘Sorry Sorry’, ‘Bonamana’ and the fan-favourite ‘Miracle’ alongside solo/unit songs from Yesung, Ryeowook and Super Junior D&E. Even though they were down to six members for this time round, Super Junior proved they still had it as they effortlessly powered through their set while entertaining the crowd with their trademark banter. Leeteuk also revealed that they will be making a comeback as a full group during the later half of the year, as well as plans to embark on their upcoming concert tour. Who’s ready for SS8?

That hilarious wardrobe clash moment when Super Junior’s Donghae pointed out that Shindong was wearing the same top as KARD’s J.Seph.

KARD’s BM being a huge mood when he met up with Monsta X’s Wonho and Shownu at the gym. The reunion of the ‘Big Tiddie Community’!

KARD’s BM saying that he saw shownu & wonho at the gym in singapore and called them the “big tiddie community” JDKDJDJDJSJK I CANT pic.twitter.com/ztbEGwp97J

Did you know that (G)I-DLE’s Yuqi is a major fan of Ryeowook? According to this fansite, Yuqi was too shy to interact with the Super Junior member so she asked the fan to take photos of him for her instead. K-pop stars, they’re just like us after all!

Like literally yuqi asked her fansite to take photo for ryeowook, and her fansite did and also tagged her 🌸❤️✨ pic.twitter.com/PbS461RkKL

What a weekend! Check out the red carpet highlights if you haven’t or recap last year’s HallyuPopFest here. Till next year!

Entertainment
HallyuPopFest 2019 Pulls Off Sophomore Show With Headliners Super Junior, Winner And Monsta X
×
Get the latest scoops delivered straight to your inbox