Mention the word camp and most would usually think of the quintessential camping experience – but KAMP gives the term a new meaning by gathering a solid roster of powerhouse K-pop acts all under one roof.

Held at the Singapore Indoor Stadium on 9 and 10 November, the two-day music extravaganza was off to a spectacular start as fans were treated to electrifying performances from the likes of Super Junior, NCT 127, Chungha, Stray Kids and more. Missed out on the festivities? Here’s what went down during the action-packed weekend at KAMP Singapore 2019! 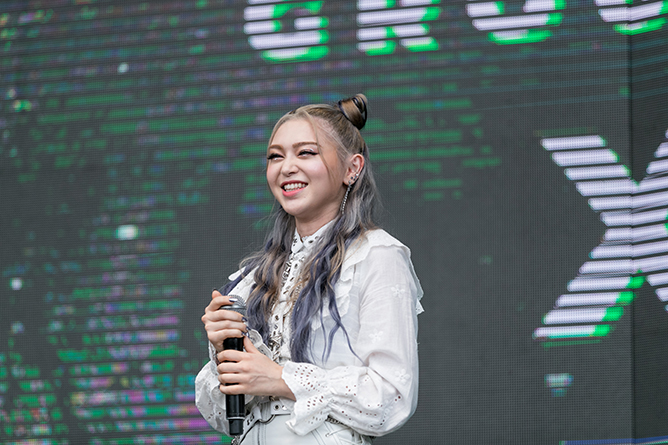 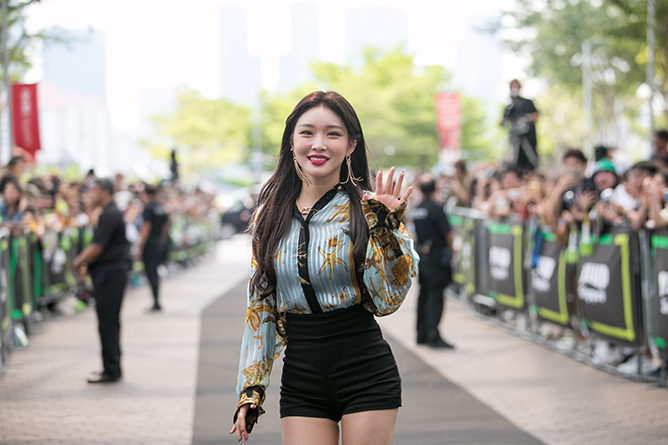 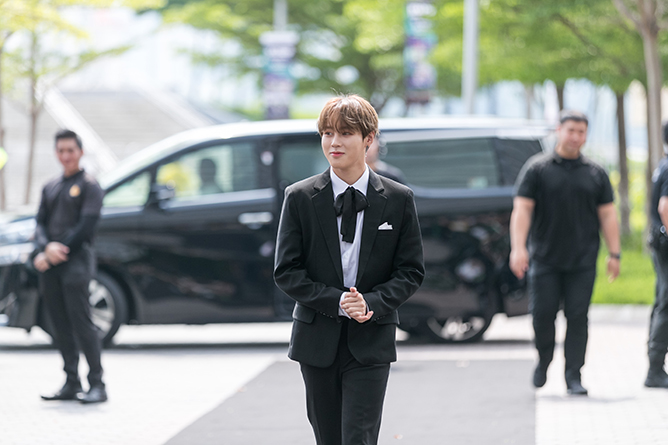 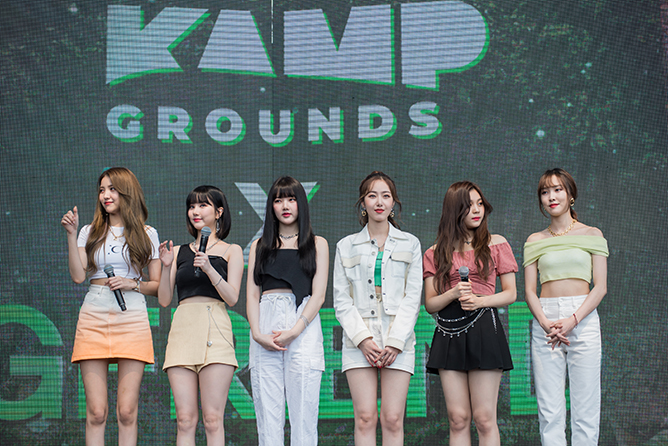 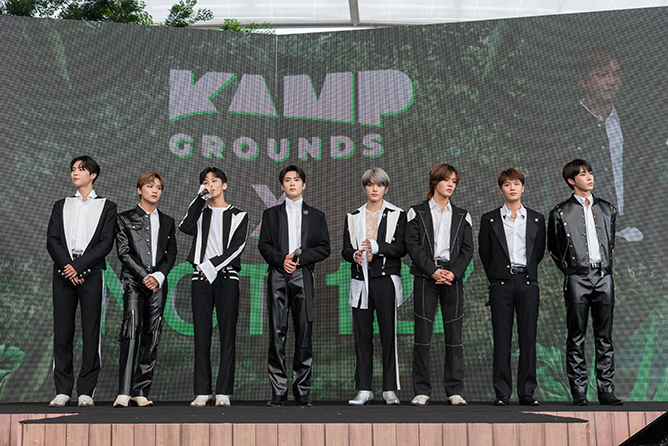 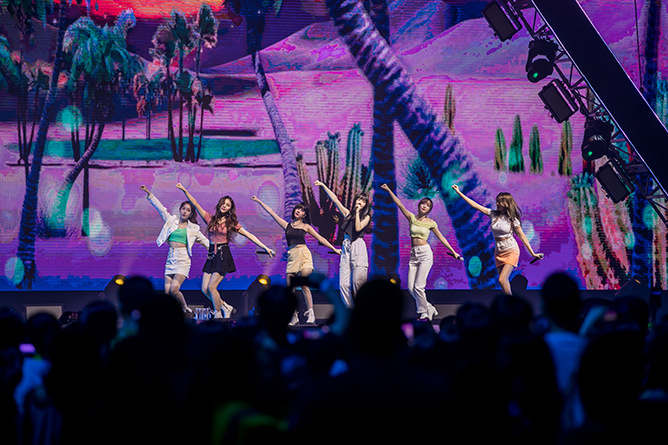 K-pop sweethearts GFriend kicked off the show with a thrilling lineup of fan-favourite tunes such as ‘Fingertip’, ‘Time for the Moon Night’ and their latest single ‘Fever’ – and they certainly know how to bring the fever to the stage! While their set left little time for the girls to banter with the audience, members Yerin and Eunha made up for it with their adorable display of aegyo, much to the delight of Buddys. 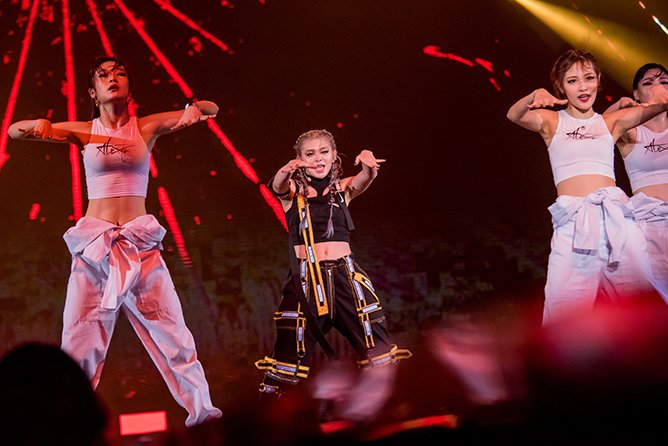 Even though she’s barely a month into her debut, Korean-American singer AleXa shows no signs of being a rookie act as she stormed the stage with her impeccable charisma and girl crush charms. There’s no doubting her dance capabilities either – not only did the 22-year-old deliver an explosive performance of her solo debut banger ‘Bomb’, she also showed off her fierce moves to MONSTA X’s ‘Dramarama’ and B.A.P’s ‘Warrior’. We can’t wait to see what else this budding pop starlet brings to the table in the future! 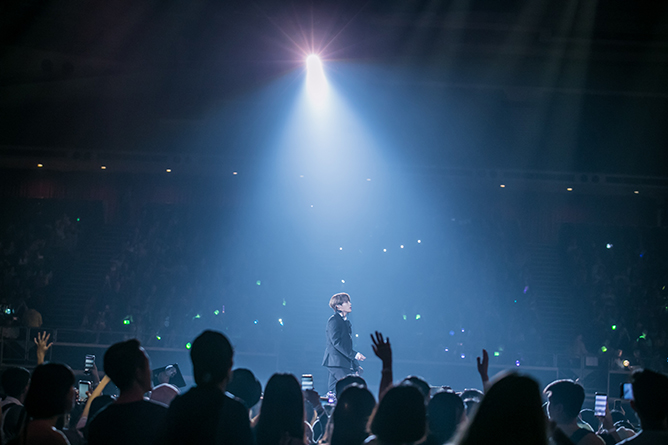 Previously here as one-eleventh of Wanna One, the former boy bander returned to our shores for his first solo stage where he delighted Haneuls with his soothing vocals in tracks like ‘BLUE’, ‘BIRD’ and ‘Don’t Forget’. Despite being a one-man show, Sungwoon proved that he’s just as capable of holding his own on stage – perhaps we can expect a full-scale concert next? 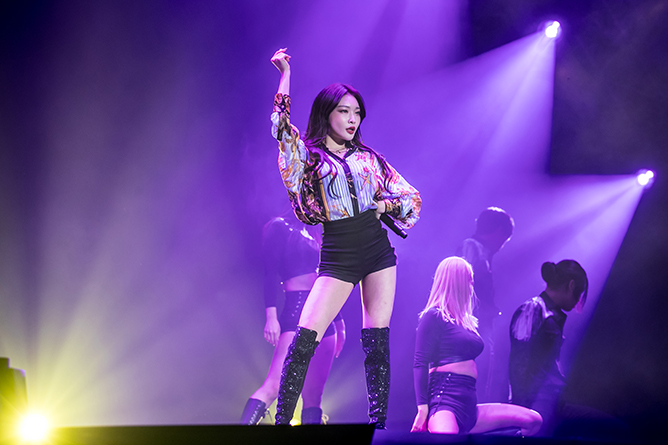 If her recent single ‘Snapping’ is any indication, it’s safe to say that Chungha absolutely snapped during her KAMP performance. “I always get the craziest energy here! You guys are the best,” she exclaimed midway through her set, before following up with earlier hits like ‘Rollercoaster’ and ‘Gotta Go’. But what really got the crowd riled up was when she surprised OG fans with a bangin’ performance of ‘Bang Bang’ – a throwback to her Produce 101 days. As expected from the queen! 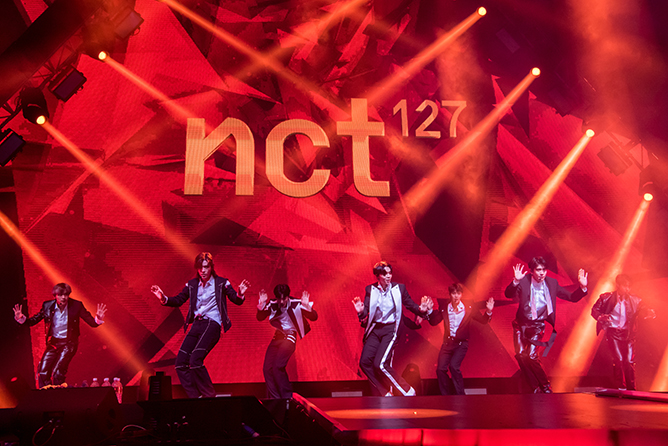 It was clear that NCT 127 was the highlight of the night, with the entire venue lighting up in a harmonious sea of green as soon as the band appeared. Although the boys had a packed schedule prior to KAMP, they hardy showed any signs of fatigue as they powered through high-energy numbers such as ‘Cherry Bomb’, ‘Fire Truck’ and ‘Regular’, before ending the show on a high note with ‘Superhuman’. 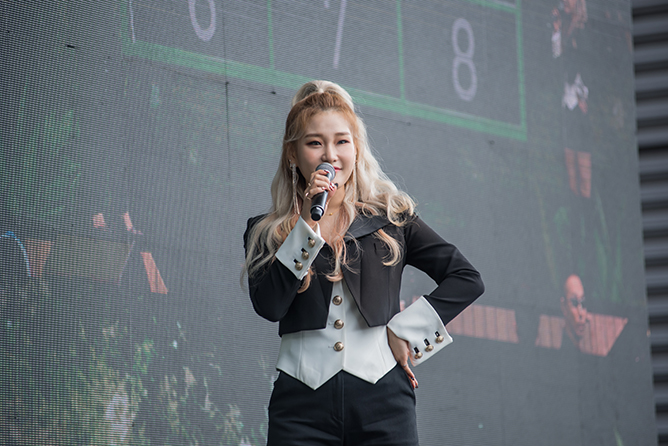 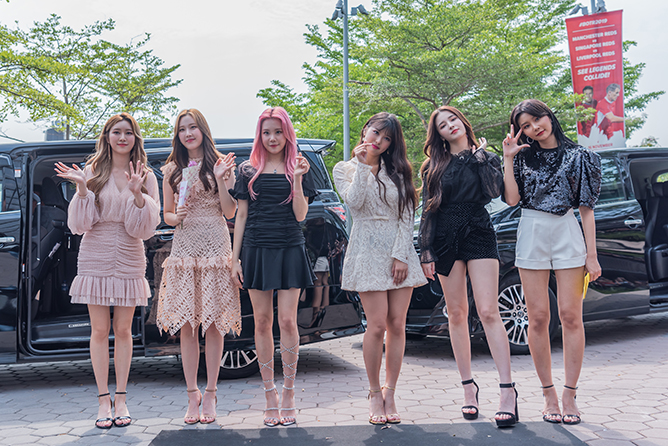 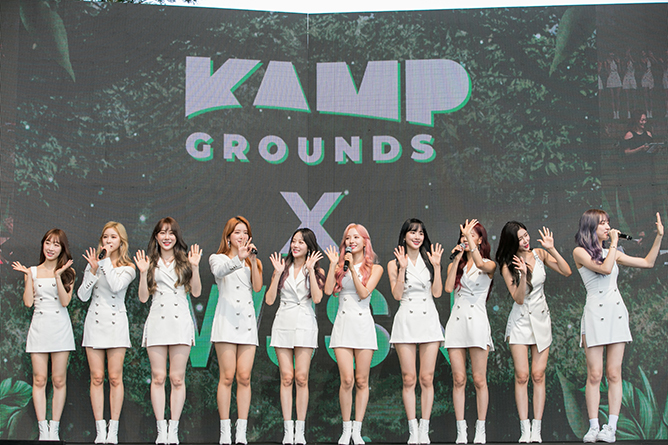 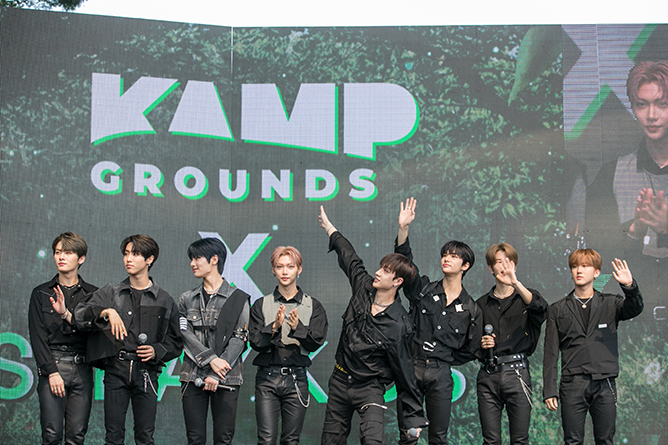 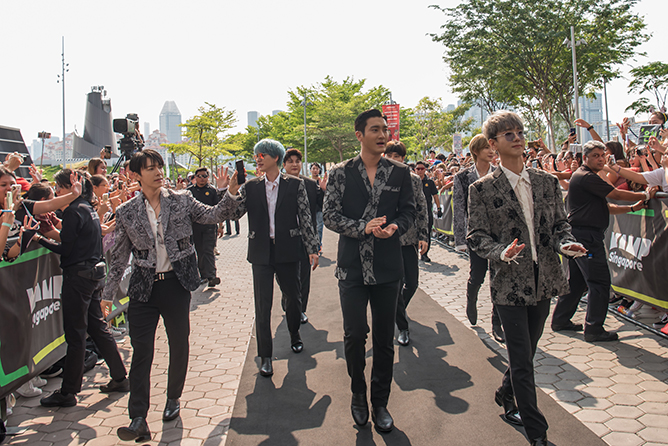 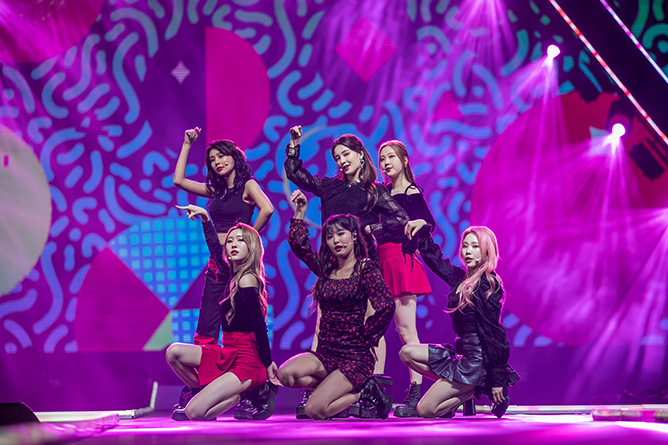 The party was just getting started! Opening Day 2 of KAMP with a bang, the girls of MOMOLAND had us all grooving along to inescapable earworms like ‘BBoom BBoom’ and ‘I’m So Hot’. Coincidentally, 10 November also marked the group’s third anniversary of debut – which made it extra meaningful for both MOMOLAND and their fans. 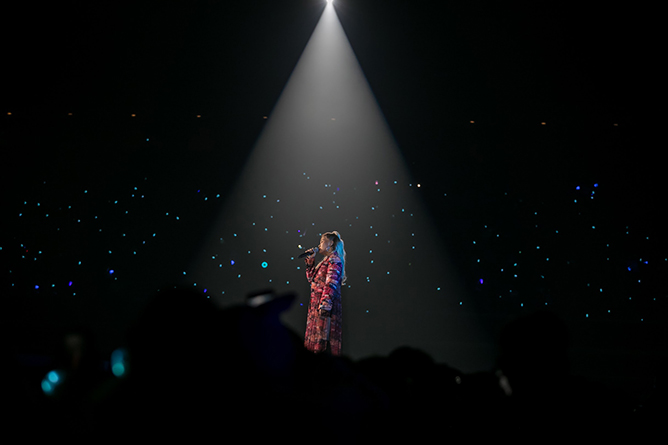 If the name Sonnet Son doesn’t ring a bell, we’re pretty sure you would instantly recognise her alluring voice the moment she belts out her first notes – after all, she ain’t the winner of The Voice of Korea for nothing.

Besides enthralling the audience with her original songs ‘Solar Eclipse’ and ‘I’m Not A Warrior’, the 26-year-old also surprised fellow Shawols in attendance with a rock version of SHINee’s ‘Sherlock’ as well as an emotional rendition of ‘Y Si Fuera Ella’, which is a solo track by the late Jonghyun. As if we weren’t already blown away by her performance, she went on to wow the crowd with a Mandarin cover of JJ Lin’s ‘Practice Love’ and her pronunciation was totally on-point. We’re stanning even harder for her now! 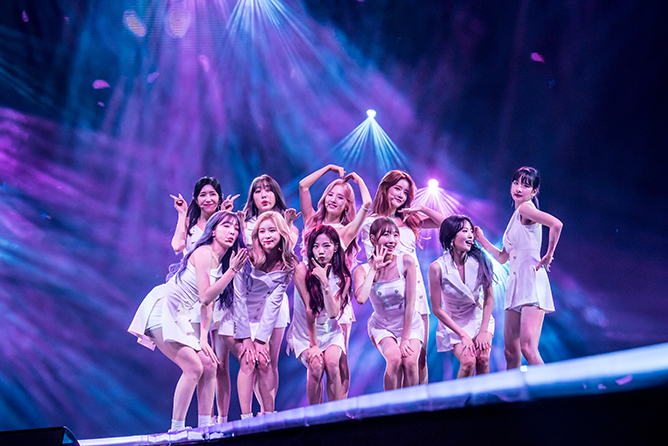 Last December, the multinational girl group was in town as recipients for the Most Charismatic Performance Award at StarHub Night of Stars – and we couldn’t help but agree that it was a well-deserved title indeed. All decked out in angelic white ensembles, the ladies of WJSN charmed the audience with bright tunes like ‘I Wish’ and ‘Boogie Up’, all while adorably confessing their love for kaya jam. Ujungs, you know what to do! 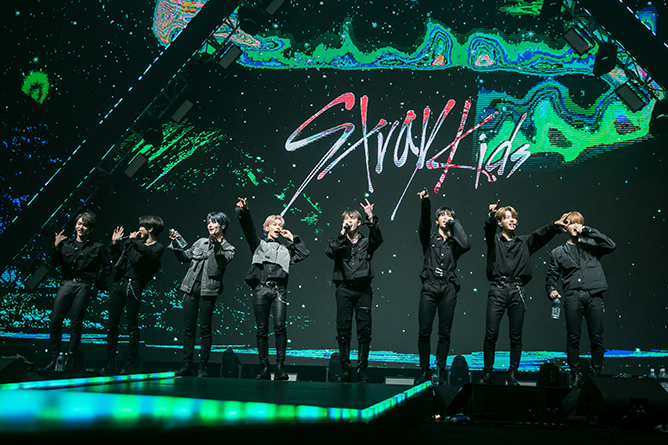 This was Stray Kids’ first time performing in Singapore, and the rising boy group certainly left STAYs wanting for more. Armed with a blazing setlist of hard-hitting anthems like ‘Hellevator’, ‘Side Effects’ and ‘Double Knot’, the hot-blooded JYP lads impressed the crowd with their show-stopping live performances and killer choreography – their energy levels never once faltering throughout the set. We could definitely see why these guys commanded one of the loudest screams of the night! 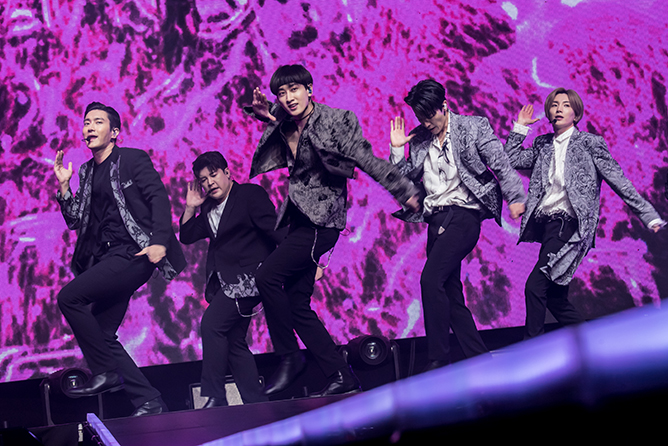 The kings have arrived! Making their grand entrance to rapturous cheers from ELFs and longtime K-pop fans alike, veteran megastars Super Junior closed off the show with a medley of classics such as ‘Sorry Sorry’, ‘Bonamana’ and their latest comeback single ‘SUPER Clap’ – effectively turning the stadium into a mini Super Junior concert.

Of course, the members didn’t forget to entertain the crowd with their trademark comedic banter – from Shindong hilariously reciting his English dialogues from a script, to Eunhyuk incorporating our national dish into the lyrics of ‘SUPER Clap’ (“I’ll make you chilli crab, I’ll make you pepper crab!”).

Psst… for those who couldn’t get enough of their shenanigans, the group also revealed that they are likely to return next year for SS8, so get ready for round two of SJ madness!

And that’s a wrap for KAMP Singapore 2019. What was your favourite act of the night? Tell us in the comments below!

Entertainment
All The Highlights At KAMP Singapore 2019 (Feat. Super Junior, NCT 127, Stray Kids & More)
×
Get the latest scoops delivered straight to your inbox