Rising K-pop boy band PENTAGON brought their world tour PRISM to our sunny shores on 2 November at The Star Theatre!

Marking their third show here, the Singapore leg of their PRISM tour witnessed an intimate gathering between the nine-member group (sans Yan An) and Singapore Universe (Pentagon’s fandom name). It was undeniable just how comfortable the boys looked on stage, and how they’ve slowly come to know their beloved fans residing miles away in our little red dot.

#PRISMinSG was truly an unforgettable show from the start till end, but here are some distinctive moments – which Singapore Universe can all agree on – that made us “love [PENTAGON] more lah”!

#1 THEIR MENTS WERE (ALMOST) ENTIRELY DONE IN ENGLISH (FT. SINGLISH)

Much thanks to fellow members Hongseok and Kino – the former actually studied in Singapore at Hwa Chong International School – the PENTAGON boys were able to conduct the entire show in impressively fluent English, without the presence of a translator. We definitely have to give it to them for their effort in preparing their dialogues and videos in their non-native language, which no doubt narrowed the often frustrating language gap and pulled Singapore Universe one step closer to their beloved idols.

For additional brownie points, Hongseok even cheekily remarked in Singlish, “Wah seh, so many chiobus in the audience tonight!”, much to the laughter of Singapore Universe. Being familiar with both English AND Singlish has definitely made him the more confident jokester of the night, as he continued to entertain fans with his witty comments and light bantering with the other members, such as offering to provide personalised translation services at a fee of $10 per member. The way he gleefully exclaimed that he has earned himself 30 bucks for translating, was just downright adorable!

#2 THEY PREPARED THE CUTEST CONCERT VCR EVER 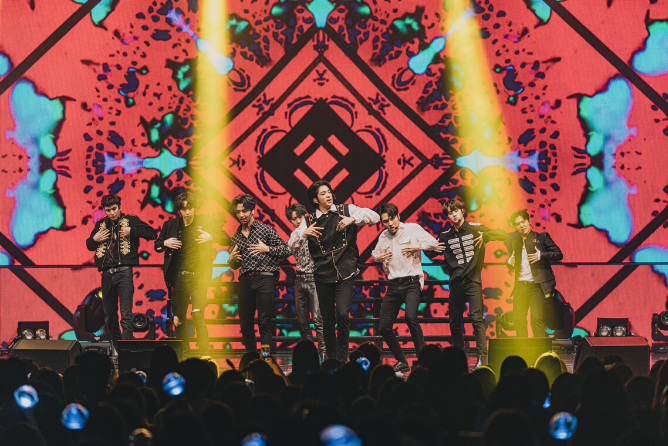 We’ve seen our fair share of concert VCRs played during intermissions, but PENTAGON wins hands down when it comes to producing the cutest and most interactive one yet. The PRISM concert VCR was modelled around the concept of an arcade video game, with the members animatedly instructing the audience on how to play the game. Basically, the “game” features a boy who has to jump over obstacles and attack an opponent, and fans simply have to shout “Hey!” to jump and “Ho!” to attack. The engaging video led to wild echoes of heys and hos throughout the intermission, but that definitely got us all pumped up for PENTAGON’s next performance!

#3 THEIR DYNAMIC STAGES WERE TRULY SOMETHING ELSE 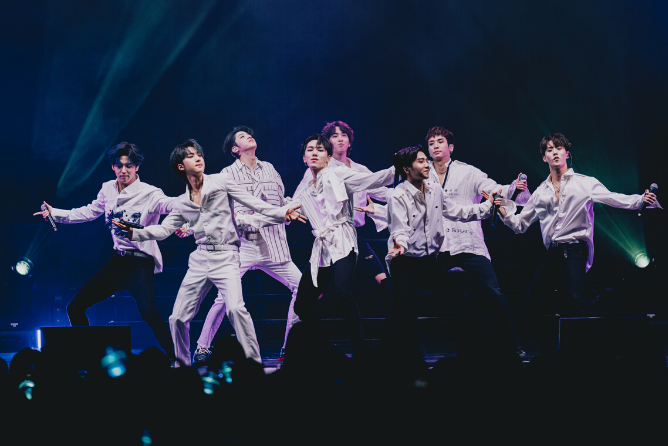 PENTAGON indeed does not fall short when it comes to quality concepts and performances. There was certainly a good mix of both energetic dance numbers and soulful ballads, with the group effortlessly alternating between powerful and cute, to sexy and masculine. Apart from hits like ‘Shine’ and ‘Naughty Boy’, we absolutely loved PENTAGON’s covers of popular pop songs like ‘Havana’ by Camila Cabello as well as ‘Uptown Funk’ by Mark Ronson and Bruno Mars. Fans were perpetually up on their feet throughout the show, which is just a testament to how charged the atmosphere was at #PRISMinSG!

#4 LET’S NOT FORGET ABOUT HONGSEOK’S ABS

Lead vocalist Hongseok was surely the scene-stealer for the night, as he turned up to the show with a visually ripped physique – much unlike his ‘pretty boy’-esque appearance (well, we’re definitely not complaining). After playfully teasing the crowd with unbuttoned shirts and exposed biceps, Hongseok had fans swooning when he flung his shirt to a lucky Universe in the audience!

And so, in response to PENTAGON’s Twitter post after #PRISMinSG: Singapore Universe definitely “love you more lah!”