It’s no secret that Korea has since become a must-visit destination for global fans to get a step closer to their idols. With a massive international fan base, BTS is one of the main reasons why the country has seen an increase in influx of tourists.

As if understanding the pull this supergroup has on the world, the Korean government have tapped on the boys’ popularity, making them brand ambassadors for Seoul in their recent campaign.

Apart from being motivated by their oppas to immerse in the Korean culture, the BTS ARMY (and K-pop fans in general) have been known for going on a ‘dukhoo’ tour or ‘stan’ tour, where they plan an itinerary dedicated to their favourite idols, chalked full of places that they’ve been to or are associated with. So if you’re an ardent BTS fan, you would probably know there’s a lot of ground to cover when planning a visit to BTS-related locations.

As such, we’re here to help you out with this compilation of BTS-approved cafes which will come in handy when you make a trip to Korea! 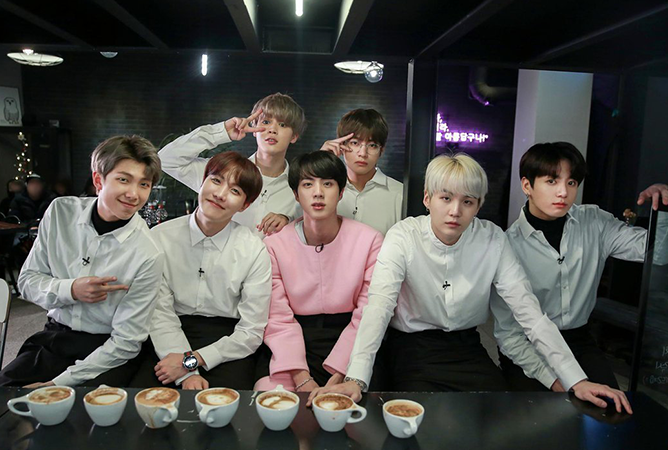 Remember when the boys took on the role of baristas in an episode of Run BTS? Providing the location for the group where they attempted to create their own cups of coffees was &gather Cafe, a rather modern-looking cafe in an otherwise quiet neighbourhood. Here, you’ll find a special menu of the concoctions they made during their short stint as baristas: Jin’s Iced Rosy Latte, V’s Injeolmi Latte, Suga’s Iced Lemony Coke, RM’s Iced Shakerato, Jimin’s Creamy Latte, J-Hope’s Iced Coco-Espresso and Jungkook’s Iced Espresso Berry Latte. 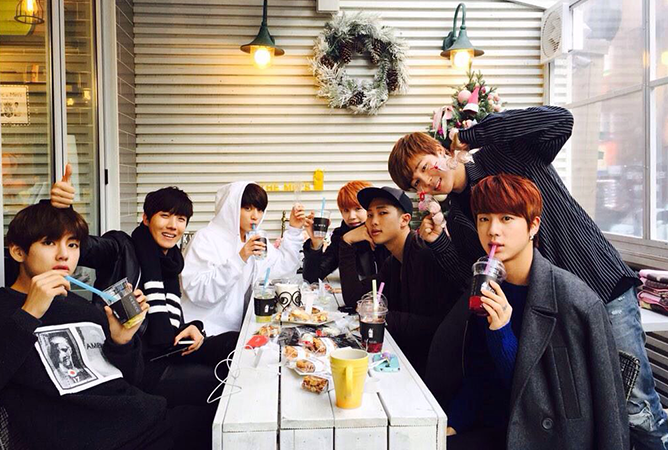 A well-known cafe amongst hardened BTS fans, The Min’s is a cafe often frequented by the boys and owned by former 2AM and Homme member, Lee Changmin. Upon entering the cafe, you will notice the walls decked in photos and autographs from the members. As it’s a pretty cosy cafe, seats may be limited depending on the time you visit, especially if you’re gunning for the exact spots that the boys sat in the last time they were here. Though the menu does feature a variety of beverages, you might want to order the freshly-squeezed lemonades or cherryade, which are what the BTS members usually order at the cafe. 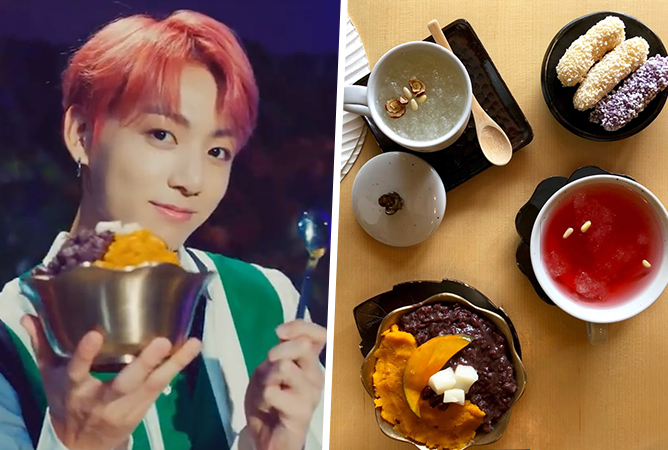 If you’re looking for a slightly different kind of experience, a visit to a traditional tea house might be up your alley. As recommended by Jungkook in the 2018 Seoul City tourism campaign, Suyeonsanbang is a traditional hanok cafe that specialises in tea and patbingsu (Korean shaved ice). Formerly the home of Korean author Lee Tae Jun, the house was converted into a cafe in 1999. A must-order is the signature Pumpkin Bingsu, which is a savoury and sweet treat comprising homemade pumpkin and red bean filling. 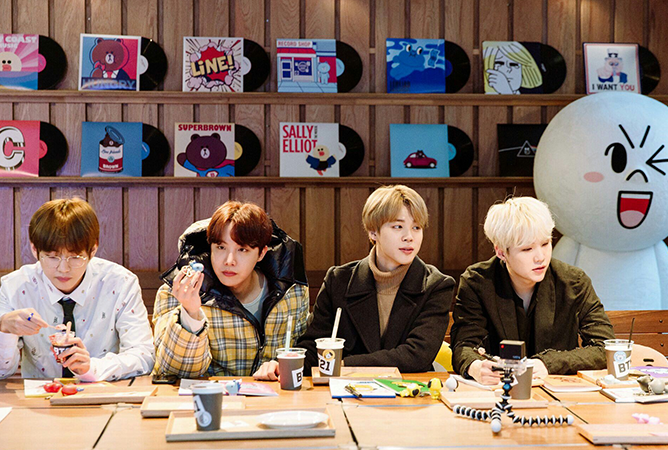 What’s a trip to BTS land without a visit to the BT21 Cafe? Located at the top floor of the LINE store in Itaewon, this is where BTS shot a couple of episodes for making of BT21. Though you can’t exactly have a full meal here, it’s a great place to unwind with a special beverage of their BT21 menu. The cafe also features plenty of LINE Friends and BT21 paraphernalia including hand-drawn drafts from each of the members during the conceptualising stage of their BT21 character. Plus, don’t miss out on your chance to get your photo taken with the life-sized Van statue that has been autographed by BTS! 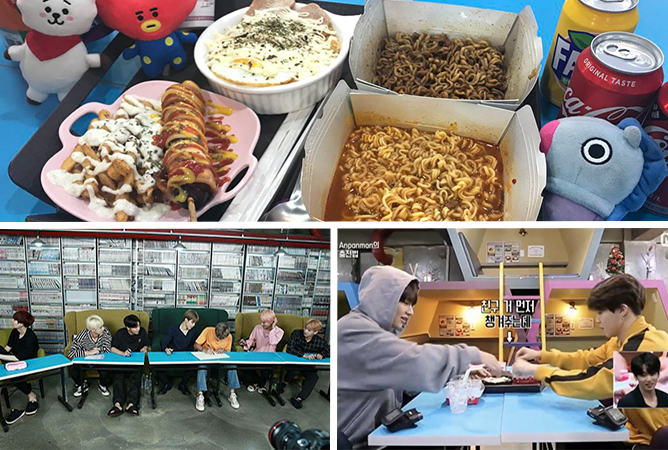 Unlike your run-of-the-mill hip cafes, Cartoon Shop V is actually a comic book store that runs a small cafe within the store. Featured in an episode of Run BTS as well as the BTS Comeback Show where V and Jimin visited, you will find a spacious space with loads of comic books in both Korean and English, complete with comfortable sofas, camping tents and honeycomb capsules that might look familiar to the eagle-eyed fans. To top off the experience, the owner of the store has also prepared a special BTS menu for fans to order the same food that V and Jimin got during their visit! 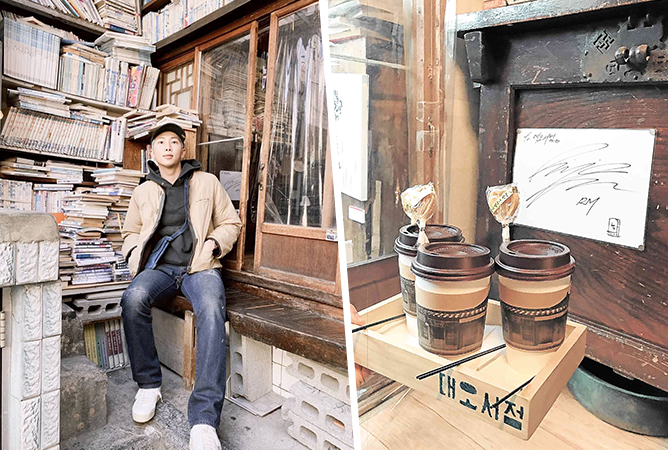 Known for being the oldest secondhand bookstore in Seoul and one of the picturesque spots that RM has visited, Daeo Bookstore has more than 60 years of history where you can appreciate in their quaint little cafe that runs within. But to get to the cafe, you’ll need to pay an entry fee of 4,500 won/6,000 won which includes a free drink. As the cafe business is set up to help fund the preservation and maintenance of the bookstore, only drinks are available here so it would be best if you had a heavier meal before heading to the store.

Da Dog In The City 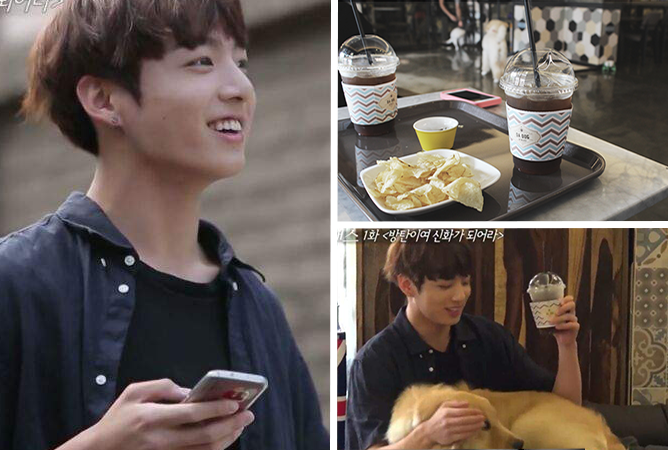 You might find this cafe familiar if you’ve watched the first episode of Jungkook’s appearance on Celebrity Bromance with Shinhwa’s Lee Min Woo. Contrary to what it might have seemed like on the broadcast, Da Dog in the City is not a dog cafe but rather a cafe catered to dog owners who have brought their canine buddies for grooming, swimming or playtime with other pups. Even if you’re not a dog owner, you’re still welcome to chill with a cuppa in the same balcony seat that Jungkook sat in! 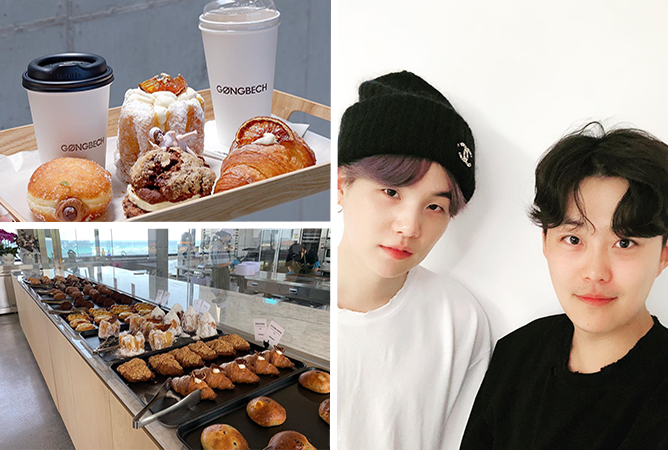 Apart from touring Seoul, you might want to set aside a few days of your Korea trip to visit Jeju Island not just for its gorgeous backdrops, but also to visit Gongbech Bakery Cafe which is owned by Suga’s brother. Located at what seems like a fairly huge building, the cafe is built with a minimalist concept which reflects a refined and comfortable space that would make for a gorgeous #OOTD post. With a good selection of bread and beverages available, this is a good place to experience Jeju that’s of slightly closer proximity to BTS.

Which of these BTS cafes are you planning to visit? Tell us in the comments below!

More related stories: All The BT21 Collaborations Every ARMY Should Add To Their BTS Collection, 8 K-pop Idol-Endorsed Snack Brands That You Can Find In Singapore

Lifestyle
The Ultimate BTS Cafe Guide: 8 Must-Visit Cafes Every ARMY Needs To Check Out In Seoul
×
Get the latest scoops delivered straight to your inbox